One of my favorite classes to teach is Brocaded Tablet Weaving in the 12th – 16th Centuries.  I bring handouts to the class, and when available, also use projectors to add to the class.

Both files are long, and use a lot of color, so I have attached them here for download.  Please feel free to share and use with accreditation.

Continuing my research on the Cod. Pal. germ 551 I have a theory about the pearl placement as described in the first section of the book.

The first several patterns are described as roses, rosebuds, or little roses along with a “wecklein” for each which looks like a leaf or stem.  I don’t have a good translation for that word yet.

Most of these roses have lines describing where the pearls are to be inserted in the band, and these come in two very distinct fashions.

Type 1 reads like this:   Raise 9 tablets, take the 10th and place one pearl therein.

Very simple right?  The one note is that “raise above” means the warp thread on top, not the brocade thread.  Otherwise this is an incredibly simple description of where exactly to place the pearl on that line.

This is a much more complex explanation and is what is the basis of my theory.

The pearl-holding thread could also be a decorative element in the band.

Evidence:  While there are no actual extant bands from this book (to the best of my knowledge) there are bands from the same time period that use multiple colors of brocade thread to create and accent patterns.  One example is the 15th century band on the chausible at the Ösmo church, Stockholm, Sweden.  (http://historiska.se/upptack-historien/object/95622-masshake-av-textil/).

Additionally, we see a very common standard of balanced patterns in embroidery, weaving, and trim throughout this period.  The patterns themselves are evenly balanced from side to side.  Ignoring the extra over and under steps results in a band with pearls lumped on one side and the other left blank.  While it can be erroneous to apply modern sensibilities to period taste, 180 pages of patterns in this exact manuscript show a preference for evenly balanced designs.

Current Steps:  I’ve been working to create a Rosetta Stone of sorts.  Many of the words and phrases are repeated throughout the manuscript and I’ve been slowly transcribing the handwriting, typed words, and translation as provided by Mistress Drea of Atlantia.  I’ve also begun drafting patterns keeping these revised thoughts about pearl placement in mind. 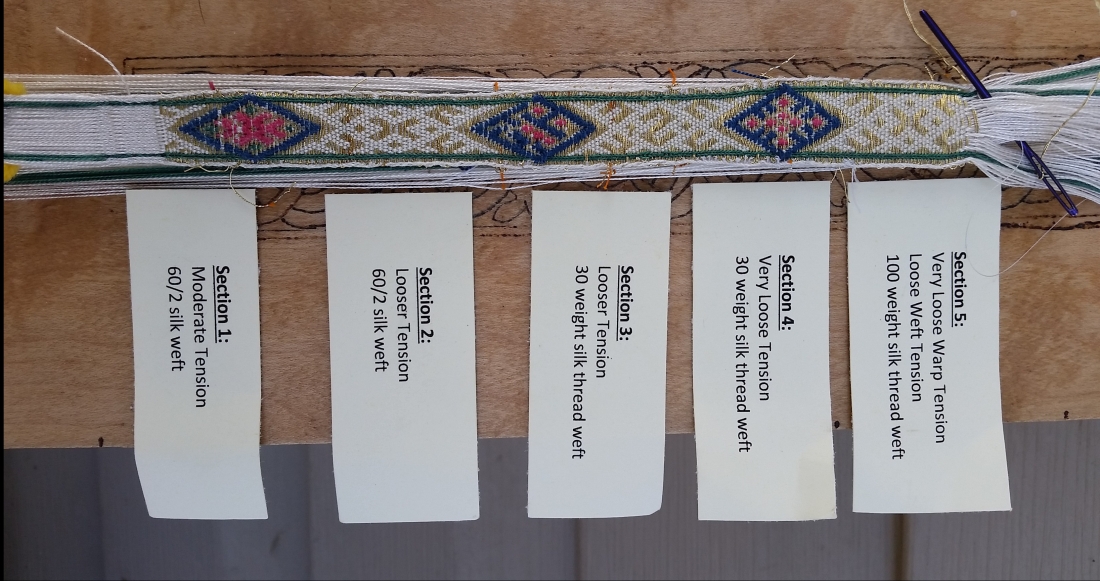 This chasuble was acquired by the Swedish Historiska Museum in 1893.   It was displayed in 1997.  The band that forms the back cross is 2.4cm wide, about .94 of an inch.  It was woven in silk and gold but is also brocaded with additional silk in several colors.

Of particular interest in this piece – the same pattern is used on multiple bands on the garment.  Twice on the cross on the back, and once at the neckline.  However, the bands were woven differently using different materials.   The vertical branch of the cross uses the colored motifs, but only in the lighter colors and is more similar to the collar band than the horizontal band of the cross.

* Illuminations from this time frame depict women tablet weaving on a standing frame loom, such as this 1410 painting from the Mazarine Bible.  However, there is not a way to tell what type of loom was used on a specific piece.  I actually have a standing frame loom on order (to be delivered Mid-May) but am currently working on this piece on an inkle style loom.  One of the biggest differences this makes is how frequently you advance the project (I have 12” of working room versus 36” on a standing frame loom) as well as dealing with twist.  Using a circular warp on an inkle loom requires that twist from turning the cards be reversed within the weaving.  Using a frame loom would allow one to untie and untwist the threads without reversing the weaving.

*** I used 60/2 silk for this project to create a piece as close to the actual size of the original as possible.  However, I did have limited colors in this size due to expense.  Therefore, I changed some of the colors but tried to keep the overall look of the band similar to the original.

*The original band has 3 colored motifs alternating with 3 gold motifs (color 1, gold 1, color 2, gold 2, color 3, gold 3, repeat) however one of the gold motifs is known modernly as a swastika.  Due to it’s modern association I chose not to use this motif and to instead alternate the other two gold motifs.

There are several descriptions of the warp threads that directly conflict each other.  The earliest public analysis is by Agnes Geijer in Some Medieval Bands, published in 1928, and lists it as having two threads of silk and two of linen, but in the same color.  Nancy Spies in Ecclesiastical Pomp & Aristocratic Circumstance, 2000, states that the band has the center threaded all silk, but with two threads of light yellow and two of green.  When carefully examining available images, I don’t see the striping that should have resulted from either of these descriptions.  I’ve contacted the textiles curator, Amica Sundström, at Statens historiska museer (the museum branch holding this piece) and am currently awaiting more information and closer photos of the band in particular.  Part of the discrepancy may be due to the presence of two separate bands on the same garment.

Initially I used the same 60/2 cream colored silk as the warp for the weft.  Both gold and colored brocade threads were used double.  The gold brocade was threaded within the band but did not go all the way to the outside card.  I used a bone folder to pick up the pattern threads and threaded the gold through on a large needle, turning under the band just before the last card. 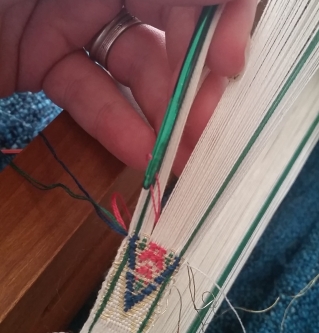 Colored brocade threads were also used double but did not go through the middle of the band like the gold thread.  Previous experimentation showed that using multiple colors of thread inside the warp created a very bulky weft that would not pack tightly to show a neat pattern.  Instead, these colored brocades wove completely below over all four threads of the band, similar to embro

This did mean at any one time I was managing 5 different weft threads:  3 colors, one gold, and the primary silk weft.

It quickly became apparent that doing each row in the exact same order was key to keeping the pattern consistent.

The first colored motif worked out the basic technique but was far more elongated than the original band.  I loosened tension and worked through a gold motif, but still found the pattern to be too long.

At the second colored motif, I changed my weft thread to a fine silk sewing thread instead of the 60/2 silk I was using.  The pattern was much better, but still not where I wanted it to be.

After the second motif I loosened up tension even more, and success!  The third motif was far more like the original band.  This was incredibly loose tension, letting the cards hang loosely by 45 degrees or more.  I’ll continue the band with this loose of tension.

I also ordered an even finer silk thread, 100 weight sewing thread, and after the third motif used this for the primary weft along with greatly reduced tension on both the warp and weft.  This section is the closest to the original in dimensions, although it is still narrower.  At this point, my band measures .75” instead of 94”.

Thread management!  There are several gaps early on where I didn’t do the threads in the exact order as the pervious row, this created lines in the pattern.  Also, this tension is by far the loosest I have ever worked with on a tablet weaving project and created some challenged with card order and learning how to pack the band tightly.

Supplies – sourcing actual spun gold was challenging and I underestimated the amount needed.  More is on the way from Germany.

I look forward to tablet weaving on the standing frame or Osberg style loom.  Though challenging, I believe this will give more insight into why we see fewer reversals on extant bands.  Also, it becomes obvious that exact tension is far less of an issue when dealing with this kind of band where the beating process is completely done by hand – not using the tension of the loom to hold the threads in place.

Special Thank you to Maria of https://historicaltextiles.org/18-2018-the-weekend-pictures/ for updated photos of the chasuble!